Out of 175 different scores sent in from 28 different countries the international jury, consisting of Seung-Won Oh (1969, KOR), Pierre Jodlowski (1971, FRA) and Willem Jeths (1959, NLD),  selected five composers for the Gaudeamus Award 2016. Together with Vine, James O’Callaghan (1988, CAN), David Bird (1990, USA), Giulio Colangelo (1986, ITA) and Shih-Wei Lo (1985, TWN) competed for the Award. Three works by every shortlisted composer were performed during the festival, including a new piece for one of the two ensembles in residence Oerknal! and Quatuor Bozzini. The jury decided unanimously to grant the Gaudeamus Award 2016 to Anthony Vine.

Jury Report
The jury says about the winner “Anthony Vine creates a solid, mature, beautifully crafted fragile sound world. He knows how to blur the identity of the different sources of sounds including the use of electronics in a very singular way.”

Gaudeamus Award
The Gaudeamus Award is an incentive prize for young composers under 30 years and is seen as an international recognition of their work and a stepping-stone in their careers. The winner will receive a commission worth € 5,000 for a new composition. For all award-winning composers Gaudeamus Muziekweek continues to take an interest in their career and ensures new composition assignments, reprises of new works and international exchange with festivals and music organizations worldwide.

70th edition Gaudeamus Muziekweek
As the oldest festival in the Netherlands, Gaudeamus Muziekweek presents the newest music by young music pioneers. New this year was Gaudeamus Saturday Night Live. An evening dedicated to the newest music in all its manifestations. Director Henk Heuvelmans: “We look back on an outstanding edition with a bursting festival programme of the highest quality. We have reached a new audience for our cutting edge programme full of music that doesn’t stick to any label. That makes us very optimistic about the future.” 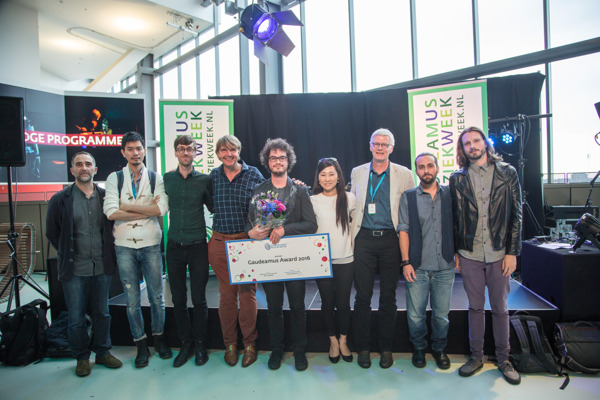