288 scores had been submitted by composers from 36 different countries. From these submissions the international jury of experts, consisting of Mayke Nas (Netherlands 1972), Joe Cutler (USA 1968) and Christopher Trapani (USA 1980), nominated five composers for the Gaudeamus Award 2017. Sky Macklay (USA 1988), Chaz Underriner (USA 1987), Ivan Vukosavljević (Serbia 1986) and Ethan Braun (USA 1987) were the other composers competing for the Award. Several compositions by each nominee were performed during Gaudeamus Muziekweek 2017, including in each case one new work  written specially for ensemble in residence Kluster5.

Jury’s report
The jury describes the winner of the Gaudeamus Award 2017 thus: 'Aart Strootman is a complete original whose sonic invention is an inspiration and who approaches composition with a remarkable freshness, reinventing the sound of each instrument within an ensemble down to the finest detail. A performer, an improviser, an inventor and a unique composer.'

Gaudeamus Award
For composers, winning the Gaudeamus Award signifies international recognition of their work, and for many of them it proves a springboard in their career. The Gaudeamus Award is an incentive prize for young composers up to the age of 30. The prize, which takes the form of a commission to compose a work for the following Gaudeamus Muziekweek, is worth €5,000. Gaudeamus Muziekweek remains closely involved with the careers of all prizewinners and nominees. The organisation arranges new composition commissions, repeat performances of works performed at the Festival and international collaboration with festivals and associated organisations worldwide.

71st edition Gaudeamus Muziekweek
During the oldest music festival in the Netherlands, we were treated to the newest works by young music pioneers. This year the Festival managed to reach a new and young audience by means of a programme devoted entirely to the latest music in all its manifestations. Programmer Martijn Buser: ‘We can look back on one of the finest editions ever, in terms of both the breadth of our programme and our success in reaching new audience. We managed to surprise our visitors with unique combinations of instruments, video, electronics, choreography and performance. For us it’s all about discovering a new sound. Totally new musical experiences which enable us to attract an ever larger audience.’

Pioneers
Young music pioneers and artists from various disciplines integrated compositions, new technologies and elements from the performing arts. Festivalgoers were surprised, for example, by the trail-blazing We cannot sleep in which, by means of virtual reality, the audience was immersed in the world of opera.

Many young music professionals and music lovers attended the extensive context programme consisting of free lectures given by composers including Heiner Goebbels and Huba de Graaff and reading sessions with the Keuris Saxophone Quartet and Ranjit Bhatnagar’s Robot Toy Piano, as well as workshops with modular synthesizers in collaboration with Sonar Traffic in Kytopia.

Senses Working Overtime
This exhibition, created in collaboration with Het Huis Utrecht and involving performative installations, drew a diverse crowd made up of students, including art students, music and theatre professionals, and a curious audience. During Tasteful Turntable participants were served twenty-four different portions of food whilst listening to a special soundtrack attuned to the taste of each dish. In total the audience could participate in eight sensory performances.

Want to know more?
The playlists and videos on the brand-new Festival website give an impression of the different sounds produced by the music pioneers of today! www.gaudeamus.nl 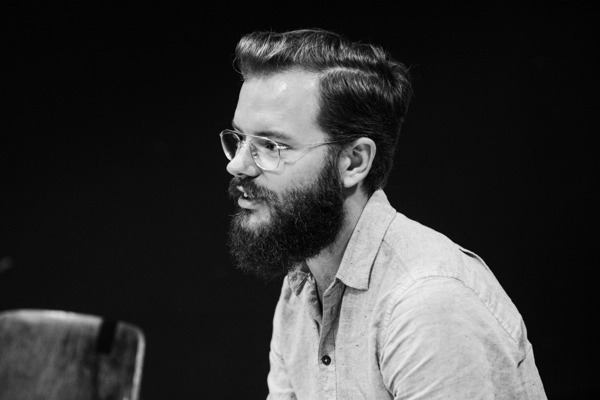